← more from
Secretly Canadian
Get fresh music recommendations delivered to your inbox every Friday. 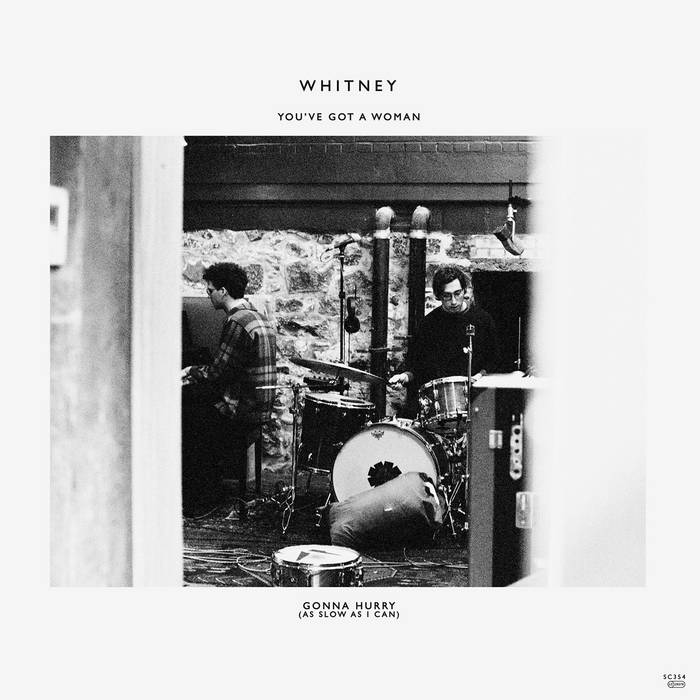 Ever since they wrote 'Light Upon The Lake' as Chicago froze around them during winter 2014, Whitney have tried to make the kind of songs they'd be jealous of if someone else got there first. "You've Got A Woman", released on the B-side of Dutch duo Lion's 1975 psych-pop 7" But I Do, is precisely one of those songs. "As soon as I heard it, I wished I'd written the vocal melody; it's so catchy and powerful," says singing drummer Julien Ehrlich. Whitney's version is rich, instantaneous and deep in groove. There's trademark brass from Will Miller, wandering lead from guitarist Max Kakacek and bursts of strings. "It's quite evil-sounding for us," Julien says. "It was fun to mess around with something darker and throw strings in." It's a Whitney hit in much the same way as a certain other single they released with 'woman' in the title at the beginning of 2016. Like "No Woman," "Golden Days" and the rest of last year's debut, it's brushed with longing, nostalgia and serves to slow down time.

Unlike Lion, Whitney make it their A-side. Flip the 12" and you'll find Dolly Parton's "Gonna Hurry (As Slow As I Can)", a short, tearful love song hewn from piano, brass, guitar and Julian's falsetto. You've heard him sing it before, live, sat on the lip of the stage accompanied by Max on guitar. "The photo on the sleeve is us recording the Dolly cover," Julien explains. "We were in a pretty room, so that adds to the image." The room in question was Thump Studios in Brooklyn, New York, where Whitney were forced to relocate after an emergency. "We were going to record with Jacob Portrait, who mixed both tracks," Julien says. "But his building caught fire." If that sounds stressful, it wasn't: recording this 12" ("You've Got A Woman" was tracked in Chicago's Treehouse Records) injected some welcome calm into Whitney's lives.

They've toured virtually non-stop for 12 months, and 2017 is fully mapped out too. There's tarmac rolling under them even as we speak, the band headed home after their first north American run of the year. "We've toured so much that the studio felt like the greatest thing in the entire world," says Julien, adding that Whitney are eager to get into album two. "We're about three songs in, we're too emotionally unstable to write on the road, songs pop out if we have chill time to process what we've been putting ourselves through." Things have exploded for Whitney in a year, and time on the road meant that even Chicago feels different now, relationships have changed, friendships have drifted. But they can still retreat into their songs, snapshots of changing seasons that will always be comforting. "This time last year we were trying to prove ourselves," says Julien. "Then there was a switch and it got way bigger than we ever thought it would. Now, Max and I are trying to conserve our brains so the next record can be better than the first. We need to control this thing a bit, and we're doing that…"

Whitney was born from a series of laidback early-morning songwriting sessions during one of the harshest winters in Chicago history, after Julien Ehrlich and Max Kakacek (former members of Smith Westerns) reconnected - first as roommates splitting rent in a small Chicago apartment and later as musical collaborators passing the guitar and the lyrics sheet back and forth. ... more

Bandcamp Daily  your guide to the world of Bandcamp

Damu The Fudgemunk shares his recent collab with Def Pressé, plus jams from Common and more